First Samuel 16-17 reveals the terribleness of a heart filled with rivalry. “A tranquil heart is life to the body, but passion [envy] is rottenness to the bones” (Prov 14:30; cf. 17:22). One of the reasons for Saul’s envying heart toward David was jealousy with regard to the victory over Goliath (1 Sam 17:50).

The method for David’s victory further aggravated Saul. Saul was a Benjamite, and the men of Benjamin were renown for slinging a stone at a hair and not missing (Judg 20:16). David was from the tribe of Judah, and not only claimed (unintentionally) the glory of Saul as deliverer of the people, but also shared in the tribal pride of the Benjamites.

Saul was consistent in praising himself, even when someone else was responsible for victory (1 Sam 13:13-4). He was unwilling to share glory with anyone. Of course, it was common in the ancient world for the king to be granted credit for victory, even if he was not involved in any manner. However, such common practices were not an excuse for the leader of God’s people to mimic. Saul’s jealously was entirely unnatural (cf. 14:38).

Although it would have been common to sing praises regarding David’s victory over Goliath, the saying displeased Saul and he “became very angry” (18:7-8). Saul’s displeasure resulted in him looking “at David with suspicion from that day on” (18:9). His anger and envy toward David led him to several murderous attempts (18:11, 25; 19:1, 10-11). 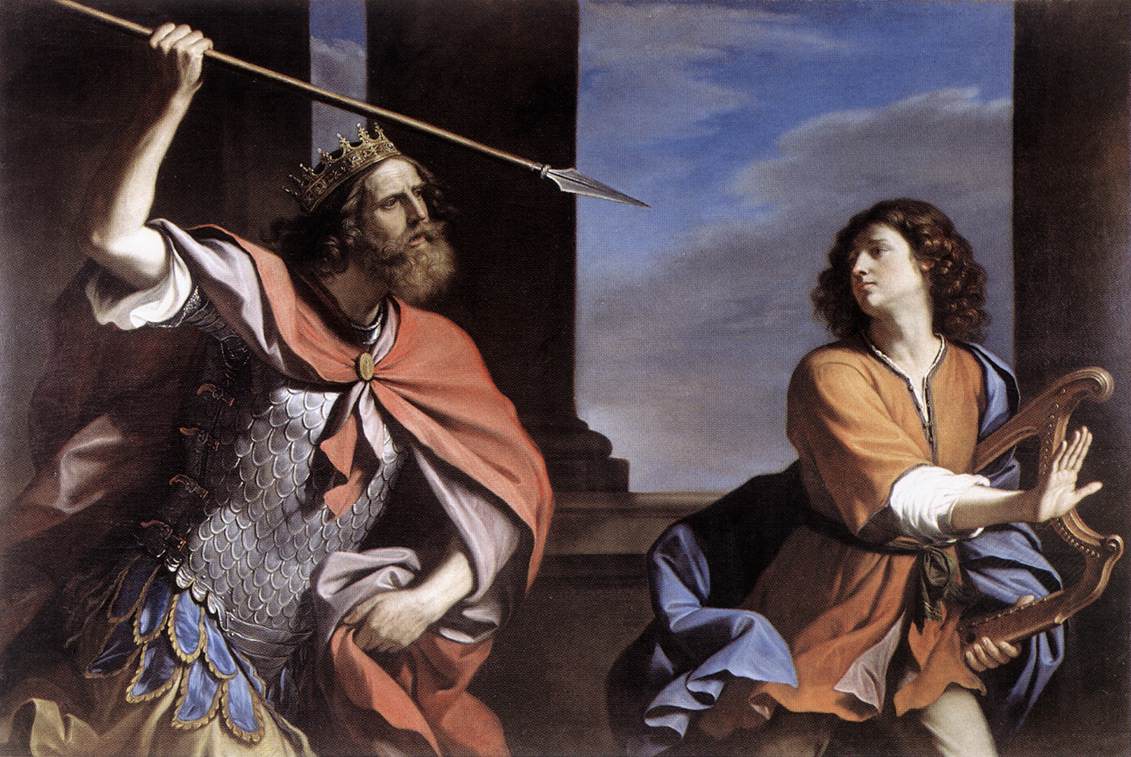 One should find it interesting to reflect upon Guercino’s portrait of Saul attacking David (1646) in the Galleria Nazionale d’Arte Antica, Rome. Both figures are still in action, but the gaze upon Saul’s face is equally frozen, which is entirely appropriate. His anger toward David was almost inescapable (not excusable) because his envy was so great. Saul even repented of his anger (19:6), but did not contain it. Saul had the opportunity for genuine repentance, but having seared his conscience, he lost the occasion for it (cf. Rom 2:1-16; 1 Tim 4:2; Heb 12:17).

David was blessed with a noble friendship in Jonathan, who helped protect David from the threats of his own father, whose actions were motivated by jealousy (18:6-9). Saul’s behavior is in contrast to his son, Jonathan. Saul sought to destroy David by any means possible, but was always unsuccessful because God was prospering him (18:14). Genuine friends recognize Saul’s actions as sinful and ungodly. God continued to bless David, and to make his name “highly esteemed” (18:30), demonstrating that the Lord honors genuine friendship that is based upon Him, and He rewards those leaders devoted to his will and purpose. Godly friendship is not self-centered, but focused upon what is beneficial for others.

Jealousy can become an overwhelming and uncontrollable impulse, even among those who should be friends. Saul should not have regarded David as his enemy because they were both fellow Israelites who served the same God (and were continually responding to the threat of the Philistines). Envy from an evil spirit always manifests in anger. Scripture warns, “For where jealousy and selfish ambition exist, there is disorder and every evil thing” (Jas 3:16). Being zealous, not jealous, is a godly virtue. “Do let your heart envy sinners, but live in [i.e. be zealous for] the fear of the Lord always” (Prov 23:17).

Tragically, envy can make an enemy of one who should be a cherished friend. David confessed honestly to being innocent of any wrongdoing (20:1; cf. Ps 59:4), which made Saul’s rage even more tragic. The wise person avoids being boastful (except in God, see Gal 6:14) so he or she does not provoke someone’s envy. Jealousy is a nearly intoxicating emotion and can often be entirely irrational. Nevertheless, genuine friendship and God’s provision can help you counter envy.

David composed Psalm 59 when Saul and his men were pursuing him. He knew God was his “stronghold” in whom he could trust (59:9). Difficult circumstances often look worse at night, so be patient for the morning and let God bring you a song of praise. “But as for me, I shall sing of Your strength; yes, I shall joyfully sing of Your lovingkindness in the morning, for You have been my stronghold and a refuge in the day of my distress” (59:16).